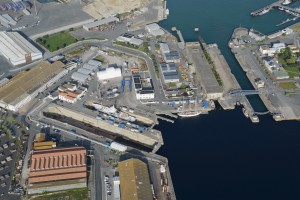 As part of the international operation “Your Atlantic Yachting Shipyard” launched in October 2013, Atlantic Port La Rochelle has selected the winning team of promoters who will be responsible for the industrialisation of the mega yachts refit activity at the Shipbuilding and Repair Centre of the Port.

After analysing the offers of candidates participating in the call for project “Your Yachting Atlantic Shipyard,” Atlantic Port La Rochelle declares Atlantic Refit Center (ARC) and Eiffel Industrie as the winners, which means the beginning of the pre-contractual phase for finalising the project. The major strengths of the winning team and their offer can be summarised in three points :

This website uses cookies to improve your experience while you navigate through the website. Out of these cookies, the cookies that are categorized as necessary are stored on your browser as they are essential for the working of basic functionalities of the website. We also use third-party cookies that help us analyze and understand how you use this website. These cookies will be stored in your browser only with your consent. You also have the option to opt-out of these cookies. But opting out of some of these cookies may have an effect on your browsing experience.
Necessary Always Enabled
Necessary cookies are absolutely essential for the website to function properly. This category only includes cookies that ensures basic functionalities and security features of the website. These cookies do not store any personal information.
Non-necessary
Any cookies that may not be particularly necessary for the website to function and is used specifically to collect user personal data via analytics, ads, other embedded contents are termed as non-necessary cookies. It is mandatory to procure user consent prior to running these cookies on your website.
SAVE & ACCEPT
Top